Mid winter can be a bit of a lean period for seasonal veg, but the noble leek is harvested throughout the colder months, and you can make all sorts of delicious things with it. All hail the leek!

Check out our video recipe at the bottom of the page for our special leek, sausage and saffron risotto, created for Eat the Seasons.

Beautiful leeks are part of the allium family of onion-like plants, which includes things like garlic, chives and shallots. They are an ancient vegetable, native to the Middle-East originally. Leeks were celebrated in ancient Egypt and Greece, and in the Roman Empire where apparently they were eaten widely as they were thought to give you a stronger voice and help with singing and oration! The Romans later brought them to the UK, where they thrived due to the growing conditions. Of course they are now a proud symbol of Wales, which it just occurred to me, also has a great singing tradition!

Leeks grow straight up and out of the earth, and farmers pile soil around the vertical stalk as it gets taller, meaning it stays tender and white, unlike the tougher green part sticking out above.

We think it’s a rather underrated vegetable. There’s a unique and deep, grassy sweetness to a leek when it’s cooked down, and they also react to heat by breaking down into a wonderfully thick and almost creamy texture due to their ‘long-chain carbohydrates’. They are abundant in the UK in winter, and therefore cheap! Their flavour and consistency makes them perfect for winter warmer dishes. 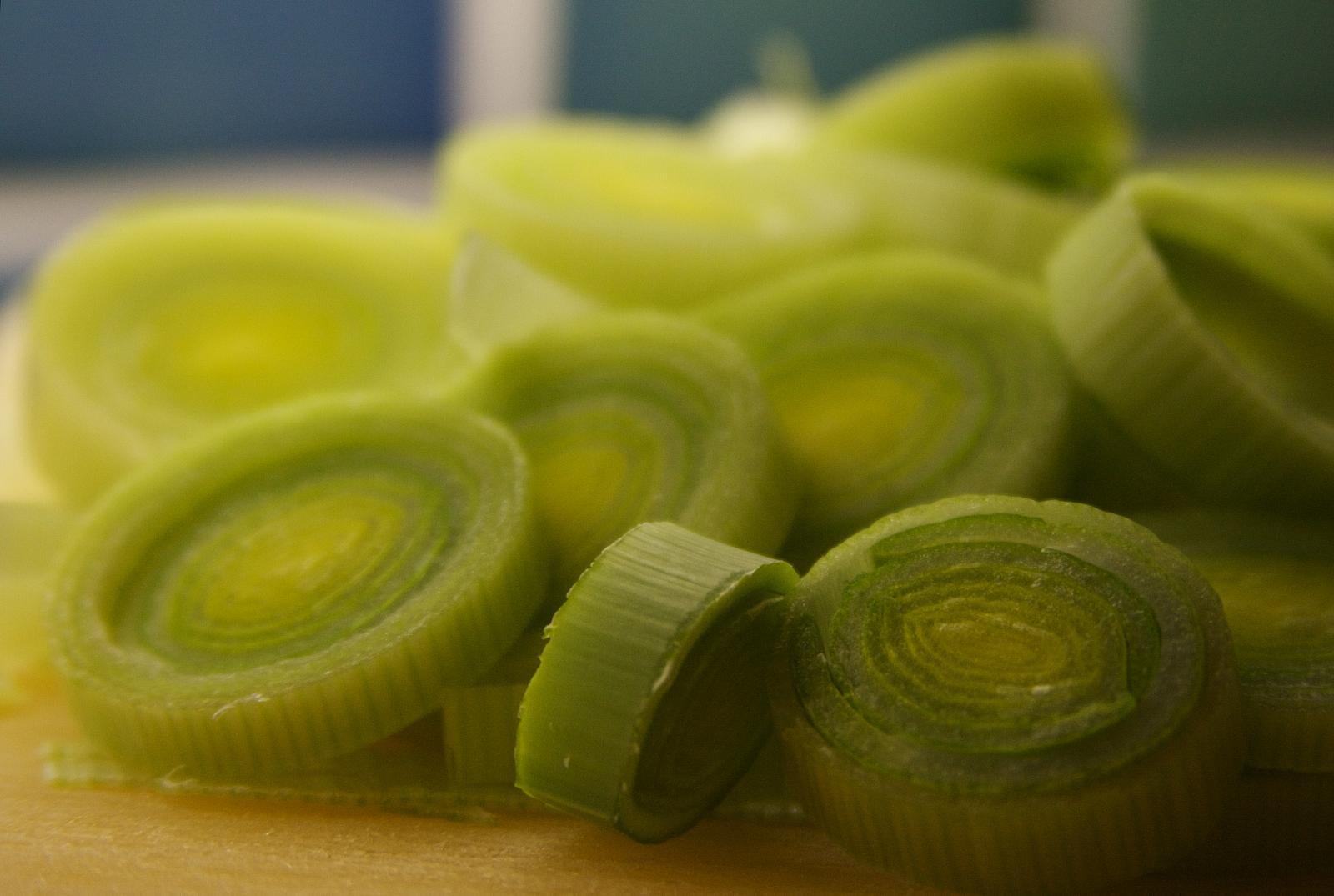 What to look out for

Stay away from a leek that’s excessively large - with a stalk wider than around 3cm - these can be woody and weak in flavour. The green leaves at the top can be used for some things, but avoid a leek that has too much green down its length since we predominantly use the white part.

How to prep them

Trim off the root at the bottom, and the top two-thirds of the green part; this is usually too tough. If there are hard and discoloured leaves on the leek's stem, you can peel them off before you chop. There is often soil in between the layers of the leek; to wash this out you can slice it in half vertically and then rinse well under the tap.

Why are they good for you?

Friend of CED and guest nutritionist Emily Moreton (Insta: thenutrinurse) gives us the low down:

Leeks contain significant amounts of the flavonoid kaempferol. Research suggests kaempferol reduces the risk of us developing chronic diseases. They are also a great source of vitamin A, which supports our immune systems and aids our vision. Leeks are a prebiotic - a type of dietary fibre that feeds specific beneficial microbes. The benefits of prebiotics range from appetite regulation, supporting bone and skin health, to improving blood sugar control. Taking advantage of the naturally occurring prebiotics in leeks is the best way to feed your gut microbes. Pair leeks with some artisanal cheese thriving with bacteria and you’ve got yourself a tasty and surprisingly gut healthy duo!

What do they go with?

As Emily mentioned above, cheesy leeks in any form are a winner - a wonderful marriage of salty, sweet and oniony - think quiches, tarts, gratins, cooked in cheese sauce etc. To be honest they'll work with all manner of ingredients, they are very versatile, as are most alliums. Once cooked they have a great sweetness, so they beautifully offset anything salty (pancetta for example) or rich (they are beautiful cooked in butter or with cream)! The thick and silky texture they take on when sweated down makes them perfect for soups, stews and pie mixes. Chicken and leeks are great mates - e.g the Scottish cock-a-leekie soup!

Don't throw away those dark green leek tops - as in our recipe below use them with any other veg trimmings and a few carrots and celery sticks to make a delicious vegetable stock/broth.

We've paired leeks with sausage meat to make a delicious risotto. We've also added a little saffron to give the dish a delicate background warm note and touch of retro! If you prefer to eat something vegetarian, this will still be delicious without the sausage. 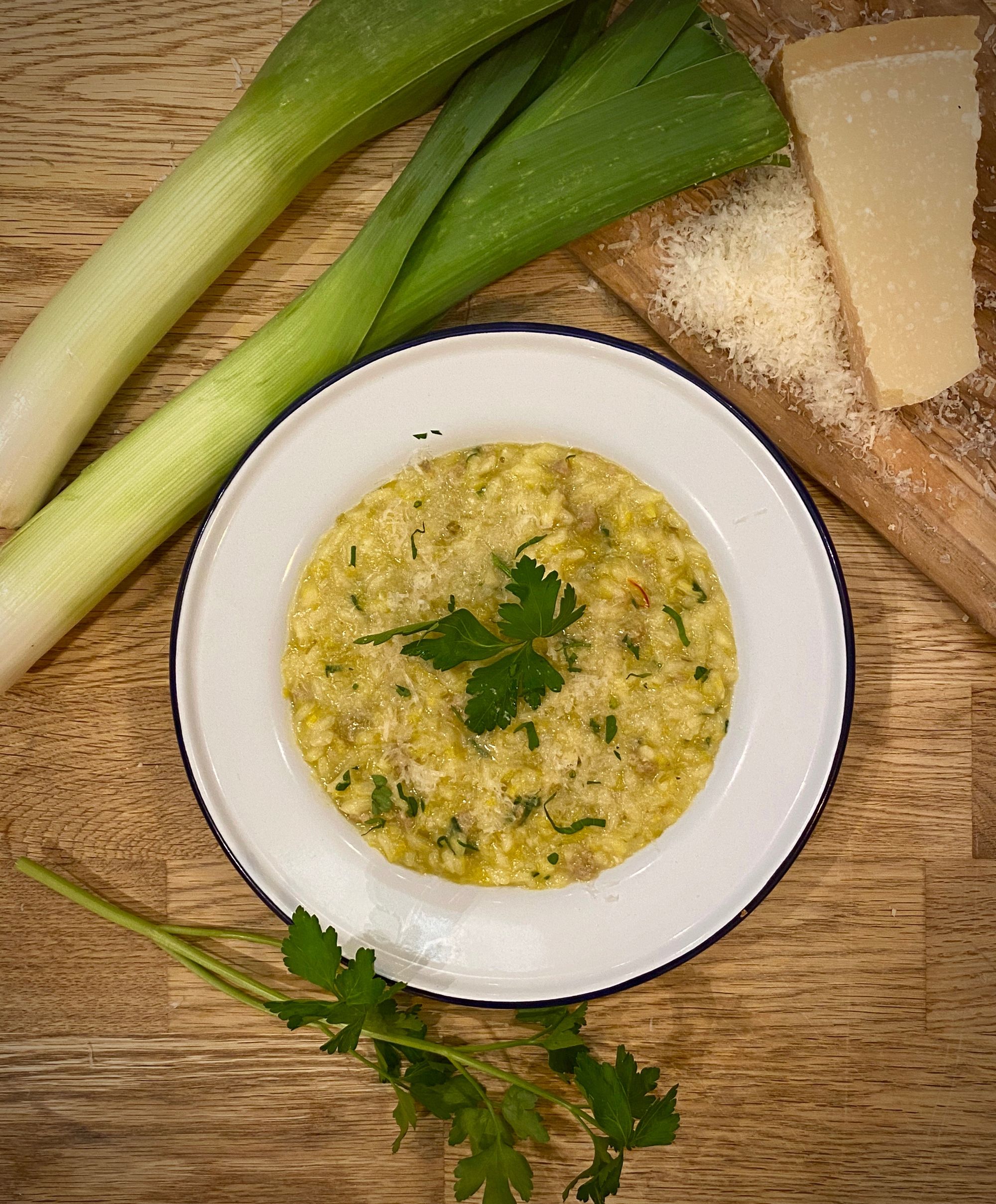