Focaccia looks wonderful doesn’t it? Golden brown, thickly crusted, dimpled, rosemary sprigged and flecked with shards of salt. Surely the kind of thing only a master baker could achieve?….WRONG! Focaccia is actually quite basic, just follow the steps below and you will create a slab of rich, crunchy and flavourful bread that will leave you feeling very smug. Plus your kitchen will smell amazing. Ok so there’s a fair bit of oil and salt in it... Italians have the joint highest life expectancy in Europe according to the World Bank, so don’t worry about it alright?

Once you’ve mastered this basic Focaccia you can start getting a little creative and put some toppings on it before you pop it in the oven - think olives, cherry tomatoes, artichokes, onions - or you can even mix some fillings into the dough  - cheese, prosciutto, mortadella, or any other outrageously delicious Italian taste nuggets.

Give it a go, and PLEASE send us a pic of the outcome. 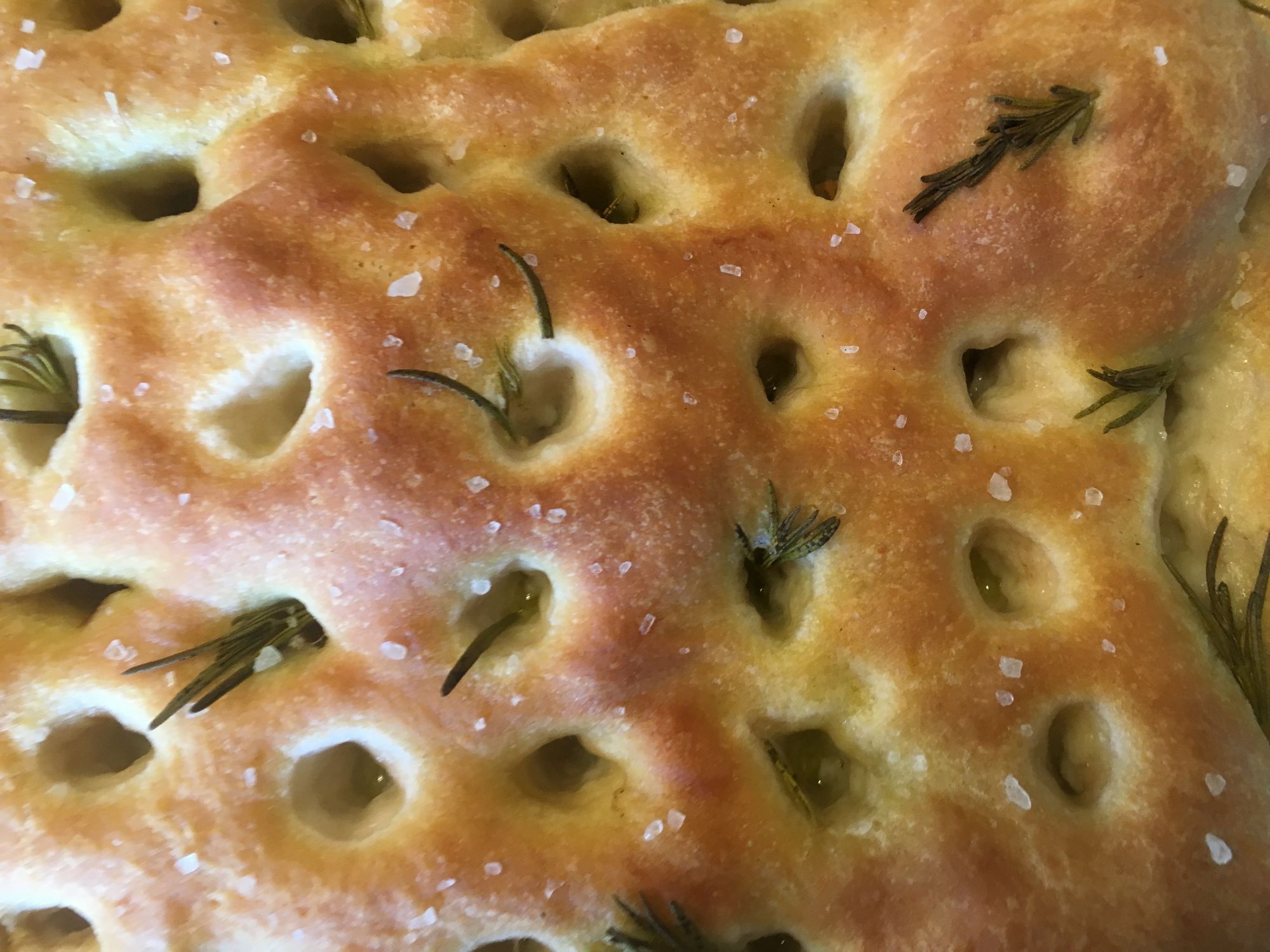 Malden, or other flaky sea salt

1 Put the sugar, yeast and warm water together in a bowl and mix well, until the yeast is fairly well dissolved (don’t worry if there are a few globules floating about undissolved). Leave for 5 minutes.

2 Put the water mixture together with the rest if the dough ingredients in a mixer with the dough hook attachment, or a large mixing bowl if you’re going to knead by hand. By hand is just as good, it will just take longer, and make you sweat a bit more. If it’s in a mixer, set it off for about 5-10 minutes, or until a smooth dough has formed. If not using a mixer, simply mix with a wooden spoon until it begins to come together. Turn out onto a lightly floured work surface and knead well for around 10-15 minutes, or until a smooth dough has formed. Shape the dough into a ball, pop into a bowl and rub a little olive oil onto the surface. Cover with a kitchen towel and put in a warmish place for around an hour, or until almost doubled in size.

3 Lightly oil the bottom and sides of a medium-sized, deep baking tray. Put the risen dough into the tray and stretch it to fit the base of the tray by pressing it out in every direction with your fingertips. Once it has spread to fit the tray, cover again with the towel and put back in the warm place. Leave for 45 minutes - 1 hour or until the dough has puffed up in the tray.

4 Next, make the water-oil-salt emulsion. This will be poured on top of the focaccia before it goes in the oven to ensure it’s crispy, yet well seasoned and moist inside. Simply whisk the salt into the water in a bowl, then the oil into the water. It should form a thick, light green coloured mix. It’s best to add the oil gradually as you whisk, this will make it emulsify best.

5 With both sets of oiled fingertips, dimple the dough from one end to the other so that there are lots of little holes in the focaccia. Pour over the emulsion, and pop small rosemary sprigs in some of the focaccia’s dimples. Scatter a little sea salt on top if you like it salty, and allow the focaccia to sit for another 20 minutes.