Cook Eat Discover was thrilled to speak to Francesco Mazzei, who has become a staple not just of the high-end UK restaurant scene, but on our TV screens too. He told us about his childhood, inspirations, current projects, death-row meal, and even provided us with a special recipe for the feature!

You may have seen Francesco whipping up a storm on BBC's Saturday Kitchen or judging contestants in Masterchef. You may also have heard about the fabulous food conjured up in the kitchens of one of his London restaurants, but Francesco grew up a long way from the UK's shores, in Calabria in the far south of Italy. In fact he told us he also had no designs to be a chef as a child, despite growing up surrounded by food. He would lend a hand in the family kitchen baking bread and making pasta with his nonna and mother, and helped out in his uncle’s gelateria.

But it was as a teenager that renowned Italian chef Angelo Sabetto recognised his talent and encouraged him to take cooking seriously as a career. He went on to catering college in Calabria, and before long he was working in the Grand Hotel in Rome. From there there was no stopping him and Francesco spent a number of years in top kitchens all around the world.

His introduction to the UK had been a 4 year stint at the Dorchester in Mayfair in 1996, and it was to be back in London where he decided to set up his very own place - L'Anima in 2008, where dishes were inspired by the south of Italy and Sardinia. Since then there have been cook books, TV appearances and yet more restaurant openings - Sartoria in Mayfair, Radici in Islington, and most recently Fiume in Battersea.

What a career you've had! What do you look back on as your proudest moment so far?

Looking back I would say my greatest achievement so far is my OBE in Italy. I was awarded this for bringing recognition of South Italian cooking across the world.

How was it arriving in London as a young chef?

Shocking! There didn’t seem to be any good quality Italian food or produce. The choice for Italian items was very limited but I was lucky enough to have had my job at the Dorchester at the time.

When did you realise you wanted to be a chef as a youngster?

When I was younger I never planned on growing up to be a chef but I believe I wasjust in the right place at the right time when chef Angelo Sabetta recognised mytalent and it all took off from there.

What has inspired you the most?

I have been impressed by many different chefs, but my family and my hometown in Calabria have been my greatest inspirations.

What's one of the greatest meals you've ever had?

Five years ago I had the best meal at Noma in Copenhagen. Everything I ate at thisrestaurant was amazing!

What are your memories of food and cooking growing up in Italy?

While growing up in Italy we would only cook with ingredients that were in seasonand what was readily accessible to us. All the time, we had new ingredients come toour table that had just come into season. The seasonal produce always tasted thebest.

The essence of Calabrian cooking is still relatively unknown here but it is home to many great ingredients such as the citrus fruit bergamot, the spicy sausage nduja and there is still so much to be discovered.

What does food and cooking mean to you and why is it important?

It’s my passion, it’s my livelihood and it’s my driving force to get up and out of bedevery day.

What do you still want to achieve?

I can’t specifically say what I would like to achieve next, but being a chef you arealways striving for perfection and learning new skills. I feel like there is still so much I need and want to learn with cooking and just can’t wait to continue to advance my skills.

Will we be seeing you on screens again? Have you enjoyed the 'celeb' side of your career in food?

I have a few appearances planned for later this year, which is exciting. I am not sure I like to acknowledge the ‘celeb’ side of my career, at the end of the day I want people to recognise for my cooking and the food I serve in my restaurants.

What is your death-row meal?

Is there something you love to cook above almost anything else?

Fish – I love cooking fish. I was born near the sea and grew up eating fish all the time with my family.

Why should we all care about what we eat and cook?

This is a big subject, but to keep it simple, I believe if you eat well and follow theseasons you can remain healthy whilst respecting nature! 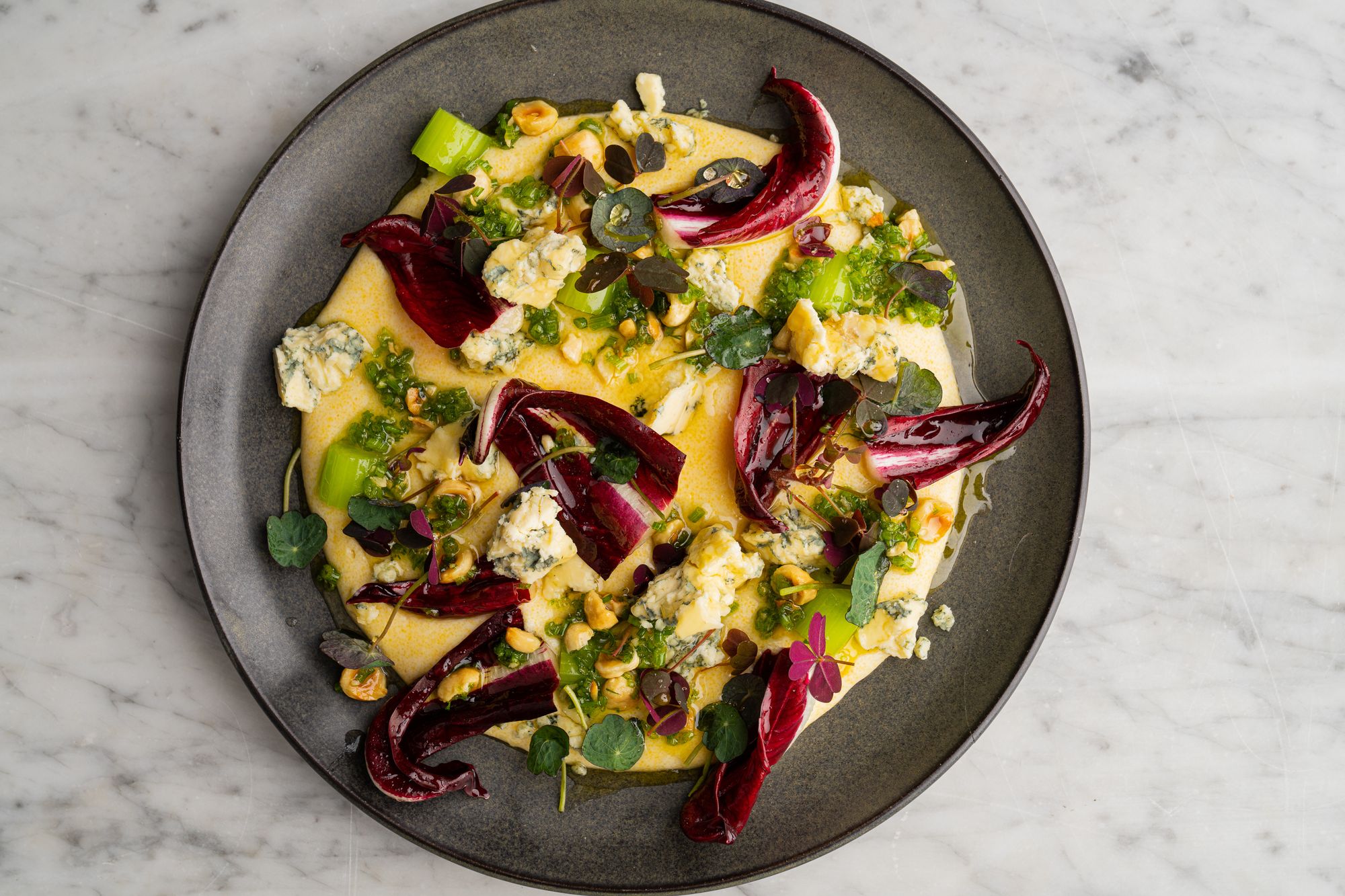 Francesco is currently working to promote polenta as a product in the UK, where it is still not a widely used ingredient. He told CED: "Polenta is great because it is so versatile. You can use it in the simplest of ways and elevate it. Polenta can be used for every course of a meal, from starter through to the desserts. It’s gluten-free and vegetarian and can produce some brilliant vegan recipes. The best way to use polenta is to keep it simple; say with ragu on top, or with fish stew. Delicious!"

He provided us with a beautiful recipe that is simple to prepare. We haven't quite yet reached the warmth of Spring, and this is a comforting dish for what remains of the cold late winter evenings. The stilton works wonderfully with the creamy polenta, nuts and bitter radicchio, and is also a nod to Francesco's time in the UK.