This February we celebrated Rhubarb - and we've collaborated with chef and friend of CED Fabrizio Ricotta who's written a recipe for a beautiful rhubarb and custard tart for us.

Here at Cook Eat Discover we have one foot in the UK and one in Italy. Our cooking holidays and workshops focus on the culinary traditions and techniques of the latter. But when I think about rhubarb, it evokes nostalgia of a childhood spent in the English countryside. Cutting through its fleshy pink stalks and picking it in the garden with my mother, before the house would fill up with the amazing aromas of a steaming rhubarb crumble that she had baked.

As far as we have seen, it's not something that is widely eaten in Italy. (Much like parsnips, which I was once told by an Italian friend are only good for feeding animals!) Indeed rhubarb isn't an obvious crowd-pleaser; it has a rather harsh flavour if it isn't given the appropriate preparation. I remember being in the garden's rhubarb patch as a kid and thinking it was a good idea to bite straight into a raw stalk - wow, what sharpness! But balance it with the right amount of sugar and its rasping tartness mellows, and gives way to something that is deep, fruity, complex and completely delicious. We absolutely love it.

In fact it doesn't seem to have been widely eaten much, apart from in medicine in east Asia, until the 19th century. Seemingly because at this time sugar became significantly more affordable in North America and Europe, hence rhubarb could be made much more enjoyable by sweetening it and reducing its mouth-puckering acidity.

It is 'forced' rhubarb that hits the shops from right at the beginning of each year in the UK. The plants are put in dark sheds and the lack of light and extra warmth 'force' the rhubarb to burst forth and provide an early harvest of rhubarb that is super pink and sweet. This is enacted in the famous 'rhubarb triangle' in Yorkshire, where it is grown abundantly in forcing sheds between Wakefield, Morley and Rothwell. Traditionally the forced rhubarb is harvested by candlelight; what a romantic scene!

What to look out for, and how to prep it

Like most fruit or veg, you're looking for crispness and firmness. The older it is, the more it will go limp and soft. With many such plants, the longer they are dead the more their natural sugars turn into starches and you lose the intensity of flavour - so fresh is best.  The leaves are not to be eaten, they are in fact slightly poisonous. Just trim the base of the stalks if there is any dirt or discolouring. Slice the stalk up into pieces and that's all there is to it!

What can you do with it and what does it go with?

Rhubarb is usually cooked down into a stewed consistency - it falls apart quickly when heated. It needs plenty of sugar to balance it as you stew it. It's also beautiful stewed with ginger, and can be combined with other fruits with triumphant results - try cooking it with orange juice or strawberries. Once sweetened and stewed it's amazing as it is - just dip a shortbread biscuit into it! If you want the rhubarb to keep its form, you need to cook it very gently before it falls apart - a light poaching or even a gentle baking.

It is traditionally eaten in the UK in desserts. Rhubarb crumbles are divine. It goes really well with cream and custard - the combination of the punchy sourness of rhubarb with rich and mellow creaminess is just perfect. This is the case with rhubarb fools, syllabubs, rhubarb and custard or in the case of our special featured recipe below, rhubarb and creme patissiere tart.

You can use it to make jams and chutneys, and it also provides a great counterbalance for rich and fatty meats - try it with pork belly or a homemade terrine/pate. It also cuts through oily fish such as mackerel like a dream.

Why is it good for you?

Nutritionist and friend of CED Emily Moreton - thenutrinurse, told us why we should all eat more rhubarb:

Like all fruit and vegetables it is a great source of fibre. Dietary fibre helps to slow the absorption of sugars which is essential in the management of type 2 diabetes, managing your weight and overall health.

Rhubarb is also a great source of vitamin K and calcium which are both involved in blood clotting, bone and teeth health and maintaining a healthy heart. Furthermore, rhubarb contains the antioxidant phenolic acid, which supports healthy skin and protects your body from free radical damage.

Around two heaped tbsp's of cooked rhubarb counts as one portion of your 5 a day, which you could easily get from a portion of rhubarb crumble, even more of a good reason to eat dessert!

However, everything in moderation - although rhubarb is naturally low in calories it requires the addition of sugar to become palatable, therefore you may want to be mindful of your sugar intake for the rest of the day

Rhubarb also lends itself really well to boozy drinks - infuse it to make rhubarb gin, or make a rhubarb syrup with which you can create a beautiful bellini!

London-based Italian private and restaurant chef Fabrizio Ricotta has written this delicious recipe exclusively for Cook Eat Discover. He says many of his countrymen underrate or are even unaware of rhubarb, but he wanted to champion the fruit by putting together this stunning tart.

While it looks complex, the recipe is made up of just three main components - shortcrust pastry, which is filled with the creme patissiere (pastry cream - a custard thickened with flour), and topped with baked rhubarb.

Don't be put off if you don't want to make the pastry, you can buy a pastry sheet in the shops. The recipe explains how to make diamond shaped rhubarb pieces to create a pattern like Fabrizio has made - if you would rather keep it simple you can lay the rhubarb on the top of the tart in any way, in any sized pieces - it's up to you. 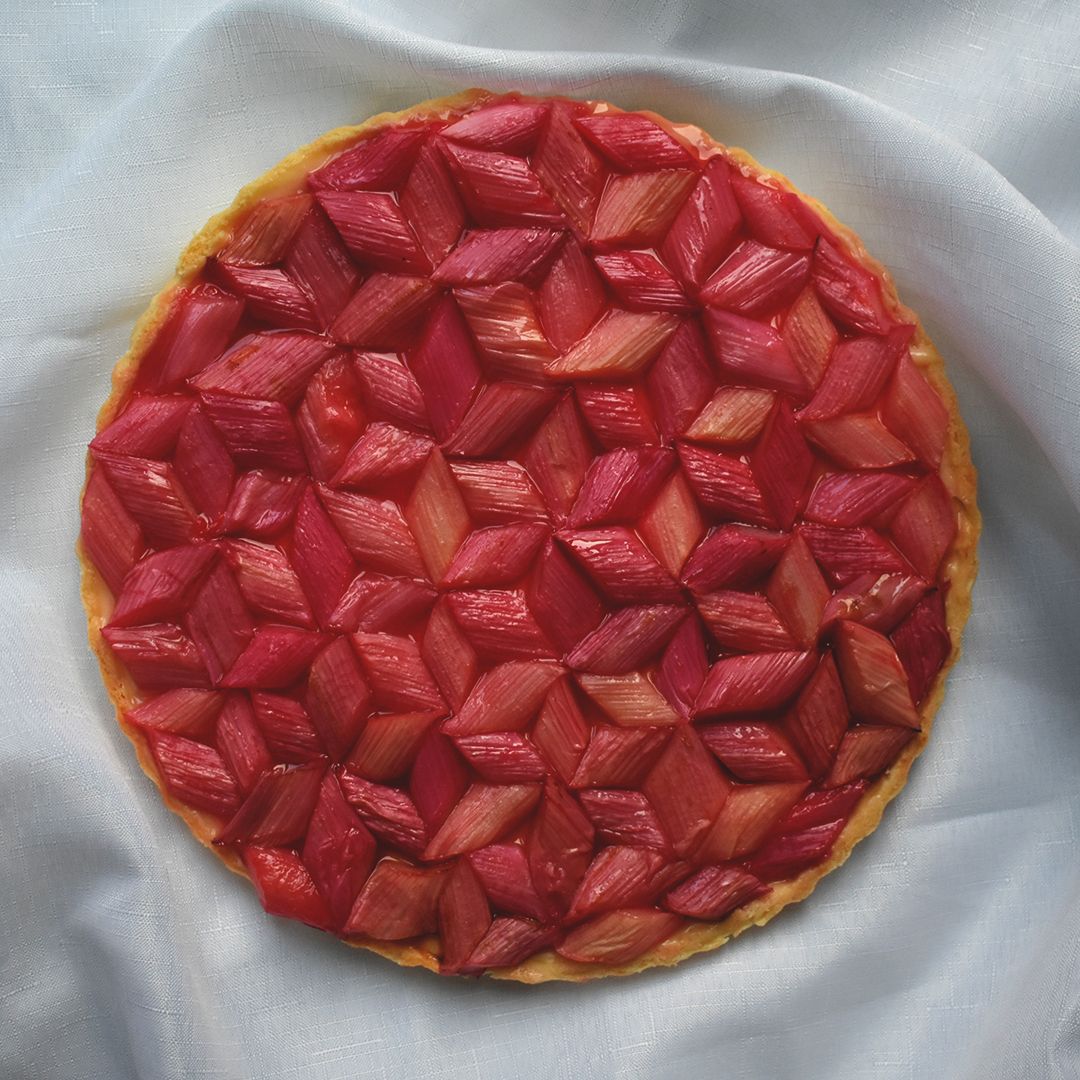 For the shortcrust pastry:2 large eggs100g icing sugar250g 00 (double zero) flour125g butter, diced and at room temperature1 pinch of saltZest of half an orange

For the baked rhubarb: